Five Ways to Know You are Simply Not Wanted

Throughout the course of our daily lives, we occasionally encounter situations where it is clear we possess some characteristic that an opposing party(ies) finds undesirable. In these situations, we often find ourselves gatekept, banned, or marginalized in some capacity.  As depressing as that may be, it’s important to take a step back from these situations and ask yourself, “Who’s the dick here?” Doing so just may help you to gain a little insight into yourself, or open your mind to the type of introspection that can help you to shave down some of those personality burrs that are snagging on the social fabric in which you are cloaked. That is, unless the opposition is in fact playing the role of the oppressive dick, trying to unjustly cast you aside.

In the following five examples, we see clear examples where, regardless of who was right or wrong, a person (or group of people) was simply not wanted and the opposition went to increasingly great lengths to ensure the message was delivered. One can only wonder how things would have turned out differently if the people involved took more time to contemplate their actions and the impact they have on the world around them. Google has a motto: “Don’t be evil”. So does Wil Wheaton: “Don’t be a dick”. Both Google and Wil offer sage advice on how to cooperate in an increasingly crowded, selfish and self-unaware world.

Michele Bachmann, perennial extreme-rightwing nutbag and bigot, was flush with cash leading up to the Ames Straw Poll this past August. Aware that she stood absolutely no chance of representing the GOP in the 2012 election, she did her best to put on a good early showing by purchasing over 6,000 votes in order to edge out Ron Paul by 152 votes…Whew, close one! The $1 million spent purchasing votes was used to hire Randy Travis to sing in her booth, give concert goers a free ride to the concert and goodie bags full of free crap to ‘entice’ voters. Sadly for Bachmann, 20% of the voters she schmoozed with free crap, still felt no obligation to lodge their vote for the nuttiest of nutty Minnesotan lawmakers. Here are the full details: http://www.unelected.org/how-michele-bachmann-bought-the-ames-straw-poll

Ahh, Bachmann. Never short on delivering the gasps. Here we see Bachmann in her consolidated form. Entertaining no doubt:

Are you white trash? Possibly, but not entirely sure? Well, if a large clothier happened to launch into crisis-image-protection-mode simply because you are sporting its threads on national television, then perhaps you should take pause, dig deep on this question. You are a star on a  hopelessly sad and degenerate TV show, watched with what must be a sense of self-hating depravity by millions, and now this same clothier wants to pay you large sums of money to stop wearing their products? What is it that you are doing that an organization would be willing to pay you to halt your free advertising? Clearly you are not wanted, but something tells me you are not getting the message (nor taking the easy money). But wait, who’s the dick here? It’s so hard to tell. A corporate dog using sex to sell push-up bras to 12 year olds or some flash-in-pan-douche? It’s all so confusing. For Mike Sorrentino, it pays to a classless-hack-of-a-reality-TV-‘star’: http://www.usatoday.com/money/industries/retail/2011-08-17-abercrombie-jersey-shore_n.htm

#3) People Aren’t Happy Simply Killing You, They Need to Stab You with a Knife in the Pooper

It’s just sad when a dry, putty-faced old dictator closes himself in his palace, shutting his ears to the population crying nepotism and corruption. A once powerful man reduced to shelling out millions of dollars in stolen oil money to foreign mercenaries to beat back his own people just to maintain his failing grip on power, while watching his rich progeny flee their opulent residences. The reveals of abuse, civilian bombings, and corruption showing a dictatorship completely out of touch not only with his people but the general ebb and flow of reality. When this type of rat is caught, you would think that his captors would be satisfied with the victory, the hopeful sea change about to come to Libyan economics and politics. However, when you suppress a people for decades, it can only be expected that the nasty, pent up vitriol can only be satiated for some crazies, buy stabbing an asshole all up in his asshole.

When Israel doesn’t agree with your position or thinks you may be a threat (or you do, in fact, pose a relatively small threat), they like to use force, and lots of it. Don’t take my word for it, just go here or here or here or here or here or here or here or here or here or here to find out just a little bit. Hell, even Israel’s modern origins are nested in aggression. But fast forward to today. A Bedouin tribe (al-Turi) has displayed the sort of tenacity and suffered a series of consequences that would make most people simply wilt and die. Over twenty times the al-Turi tribe has watched while the IDF bulldozed their homes and ploughed their crops back into the land. Each time, they rebuilt on the same land as their relatives had been doing for hundreds of years prior. Frustrated by their failed attempts at implementing ‘evictcleasing’ (ethnic cleansing by way of illegitimate land eviction = “evictcleansing” !) – Israel decided to take a new approach: sue the al-Turi for repeated demolition costs! That’s right, when those rapscallion rightful residents decide to rebuild after being wrongfully demolished over 20 times what do you do? Sue their dirt-poor, nomadic asses! Congratulations to all my Bedouin friends in Israel…clearly you are not wanted! But for what incredibly urgent need must these dirty Bedouins be bounced you ask? Well, the Israelis want a forest. Important to note, in Israeli mathematics, there is a certain relational formula which helps to show the relative values of things. Here is an except:

#5) Your Parents Kill You Because You Have a Vagina

Yeah, that troublesome vagina has been causing all sorts of trouble over the years: keeping the ladies from voting, keeping their wages lower, banning them from religious leadership, keeping them out of school, and creating worldwide social constructs where a man’s legitimacy in anything from science to farting is viewed as almost biologically superior. Sucks to have that stupid-ass extra X chromosome, what a hassle! That pesky vagina has even been the sole reason millions of otherwise loving parents have chosen to terminate the lives of would be and recently born daughters. Yeah, the sheer aversion to the V has resulted in upticks in abortion and infanticide over the last 20 years in China and India where having a girl, by one man’s account is “worse than getting gout or being raped by a pack of rabid squirrels.” Damn, you know you’re not wanted when…

You should buy my debut novel, Where’s Unimportant. It can be found at any major online retailer (or on my website at http://www.danielshortell.com) in ebook ($2.99) and paperback ($10.99). The ebook is cheaper than a freakin’ latte, and 8 out of 10 people agree that it is more enjoyable to read than being stabbed in the butt-hole. 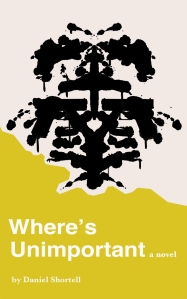 Some people are OK. For instance, you are seven months pregnant and you just boarded the bus or train. The moppy-hair kid with the PSP takes note, invites you to have his seat while he disembowels opponents on Mortal Kombat, standing. He’s not so bad and chances are you won’t spend the next 30 minutes developing increasingly vile scenarios by which he meets his inevitable doom. A win-win situation for the both of you.

However, many (most?) of the people you encounter throughout the rest of your day are probably less palatable. The world we live in has spawned a race of people who bond together in silent accord over a set of behaviors (habits) which are the topic of this week’s posting. It’s not that these people are malicious (although some certainly are), rather, this subsection of humanity has devolved into a sort of self-unaware conglomerate of energy consuming cells seemingly bent on creating a less habitable world for us all. By consciously choosing not to be cognizant of their actions (or more importantly, the impact of their actions) they have laid the foundation for a society which progressively cares little for the common good in preference for a type of F U Individuality that increasingly defines our societal fabric. Some of these habits are merely a nuisance. Others generate the sort of vitriol that, over the long stretch of history, may effectively Darwinesque them into a forgotten oblivion. The reader should feel free to parse the following habits into appropriate buckets, and, if a responsible citizen, should feel a sense of obligation to call out offenders when they act in such a manner. Together, we the denizens of a better future, hold strong under a flailing banner of optimism and the prospect that tomorrow can be better if we manage to wash the following patterns of behavior from civil society. I present to you , in no specific order, The Seven Stupid Habits of Highly Annoying People: